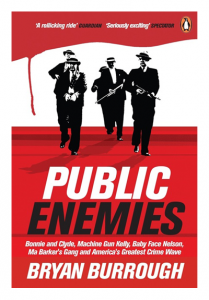 Burrough examines the stories of John Dillinger, Baby Face Nelson, Pretty Boy Floyd, the Barker-Karpis Gang, Machine Gun Kelly, and Bonnie and Clyde as a single narrative history of the FBI’s “War on Crime” from 1933 to 1936.  For Burrough, the story is about the bureaucratic evolution of the FBI from a bungling group of amateurs to a professional crime-fighting organization and his central aim is to reclaim the history for the individual agents involved. In 2009, the book was made into a movie starring Johnny Depp.

“The Big Rich (is) lively reading…. But Burrough, with his gifts for synthesis and lyricism, brings more to the table than that. His set pieces describing the events at Spindletop, the gusher that started it all, and the rise and fall of the wildcatter Glenn McCarthy (the model for Ferber’s Jett Rink) are impeccably rendered, as are the tales of many other fabled characters. Burrough has also done estimable new reporting, showing links between Texas money and national politics that stretch back far earlier than the days of Lyndon B. Johnson…”
—The New York Times Book Review

“It would be hard to ask for a literally or figuratively richer cast of characters than those in ‘The Big Rich.’.. Nicely detailed and suspenseful.”
—Harry Hurt, New York Times Sunday Business Section

What’s not to enjoy about a book full of monstrous egos, unimaginable sums of money and the punishment of greed and shortsightedness by the march of events? Bryan Burrough, a former Wall Street Journal correspondent and one of the two writers behind the hugely successful “Barbarians at the Gate,” now offers another cautionary tale. This one is even larger in scope, and tells the story of the rise and fall of four of the giant oil families of Texas. It is a ripping read from start to finish. At the end of it those of less ample fortunes will feel their Schadenfreude richly indulged.” —The Economist

“In The Big Rich, Bryan Burrough has produced an elegantly interwoven chronicle of the lives of mid-20th-century independent oil barons and their families.. A smart, readable book with lessons for today’s executives diflucan otc.” —
Business Week

“A galloping history of the wildcatters whose drive, ranches and gaudy mansions inspired both the Beverly Hillbillies and their malevolent neighbor, J.R. Ewing.”—Bloomberg News

“Capitalism at its most colorful oozes across the pages of this engrossing study of independent oil men… This is a portrait of capitalism as white-knuckle risk taking, yielding fruitful discoveries for the fathers, but only sterile speculation for the sons—a story that resonates with today’s economic upheaval.”
—Publishers Weekly (starred review)

“Burrough… invokes a tale of bitter competition, family feuds, booms, and bankruptcies that more than lives up to the legends.”
—Booklist (starred review)

“An indispensable guide to the knotty fascination—deserved or not—that Texas spurs in the American imagination.”
—Bookforum.com

“Bryan Burrough has long been one of this nation’s best storytellers, but he has outdone himself with his tour de force, THE BIG RICH. Set amid the rough and tumble of the Texas oil fields and stretching to the halls of political power in Washington, this epic tale reveals the hidden undercurrents of modern American history that flowed from four families of unimaginable wealth and recklessness. With an unerring eye for detail, Burrough dissects their lives and histories, starting with the patriarchs—struggling, poorly educated men who might have remained forever unknown if not for their success at pulling black ooze from the ground. THE BIG RICH lays bare their arrogance and aspirations, their principles and hypocrisy, their daring and foolishness, taking readers deep inside a world of affluence that has remained secret for far too long. It is, quite simply, a triumph.”
—Kurt Eichenwald, author of The Informant and Conspiracy of Fools

“It’s hard to imagine a greater literary marriage than that of the oil barons of Texas and Bryan Burrough. On the one hand, you have a collection of gargantuan personalities who in the 1920s struck it rich and then, in the decades that followed, used their wealth to transform American business, culture and politics. On the other, you have an author—and native Texan—who writes, as he always does, with enormous insight and panache. THE BIG RICH has all the hallmarks of a classic American saga.”
—David Margolick, author of Beyond Glory: Joe Louis vs. Max Schmeling, and aWorld on the Brink